I remember the tales about Chernobyl from my parents and grandparents who grew up in the Soviet Union. The government coverups, the magnitude of the disaster, and the fact it happened close to where they are from always fascinated me. Every kid has a subject they ask their parents about over and over again. For me, it was Chernobyl.

So, I decided to visit and see it for myself.

After a quick rendezvous in Kyiv, our group of 16 was headed to the most radioactive place on earth onboard a Mercedes Benz coaster. 2 hours later, we were greeted by a massive “radioactive” sign. Humans are indeed special, we see such a sign and voluntarily visit the place that lies beyond it…

To reach the Chernobyl power plant we had to go through 2 checkpoints. After the first checkpoint, we entered into the exclusion zone– a 1,000 sq mile territory surrounding the site of the deceased nuclear plant. Entering is only allowed if you are with an official guide.

Inside the exclusion zone

As we got deeper into the Chernobyl exclusion zone our guide told us about the Ukrainian horse experiment. In the 90s Ukranian authorities released 5 wild horses into the exclusion zone. The goal was to see if they could survive here. Well, they did. Now there are more than 50 such wild horses.

The first sign that a nuclear disaster happened here is the red forest. It looks like it was burned down. Genia told us the damage was caused by strong winds that brought exceptional radiation to the forest.

Suddenly, the dosimeters some of us were carrying went off–with a fury. They all started beeping at the same time as if officially welcoming us to Chernobyl.  The annoying beeping sound would follow us through the whole excursion.

Inside the exclusion zone, there are 3 points of interest; the abandoned city of Pripyat, the town of Chernobyl, and the nuclear power plant. We visited all 3. 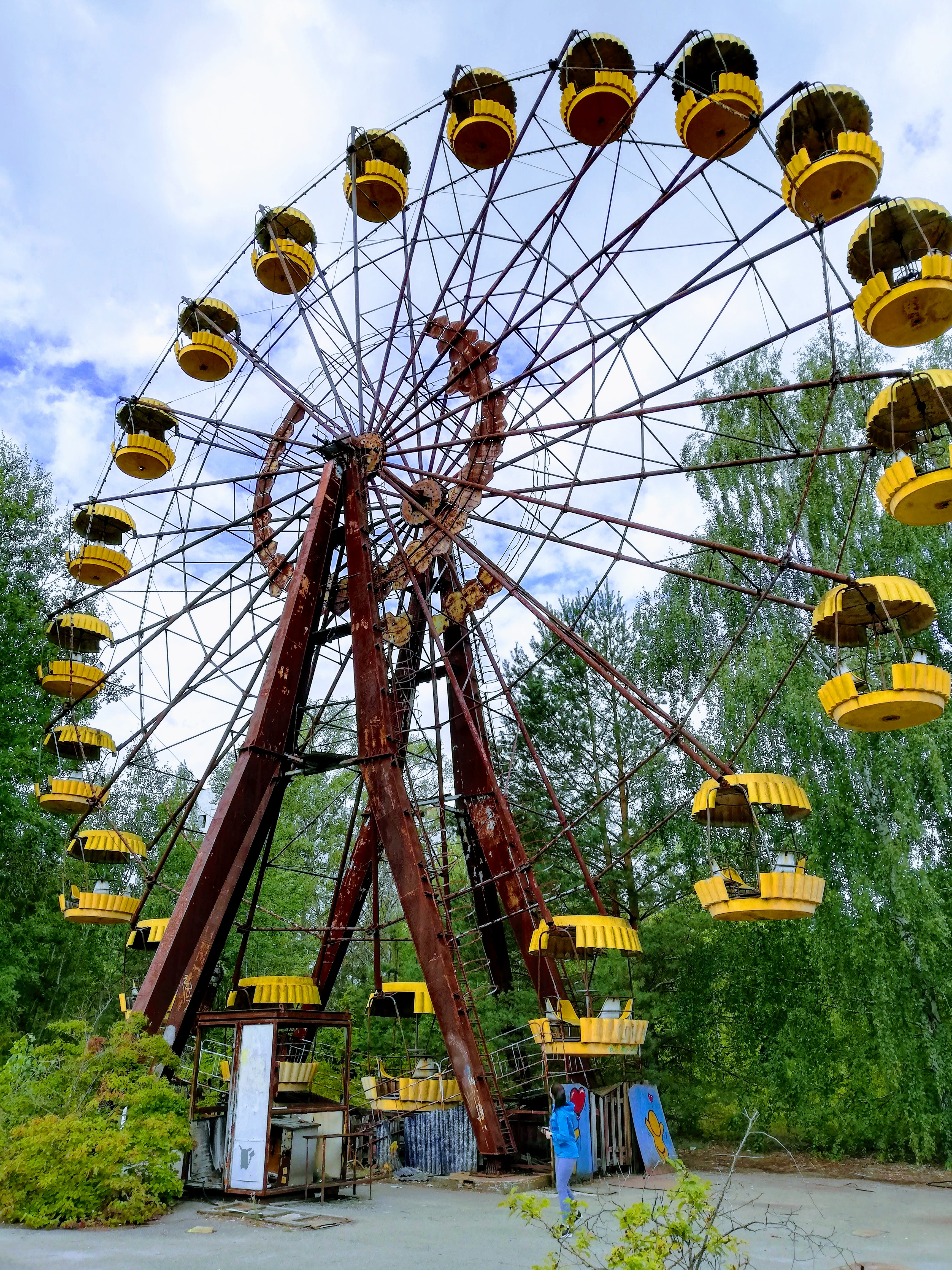 The city of Pripyat was founded in 1970 to house the plant’s workers and their families.  Some residents could see the plant from their apartments, it was that close.

In its prime, the city had a population of about 50,000. Nobody has lived there since it was evacuated in 1986. Well, except for one man–it is said that he lived here for 5 years, before dying of mysterious causes. He served as a cautionary tale. Nobody else attempted to relocate to Pripyat.

We spent about two-thirds of the tour hopping on and off the coaster and visiting the different sites in Pripyat.  Mind you, we were with the guide at all times. We couldn’t “roam” on our own.

We explored the swimming pool, Ferris wheel, school, supermarket, and some other facilities of what was once one of the most advanced cities of the Soviet Union. Pripyat shows us what happens to a city when it is left to its own devices. Nature has completely taken over. Unfortunately, we didn’t see any of the feral animals said to roam there. 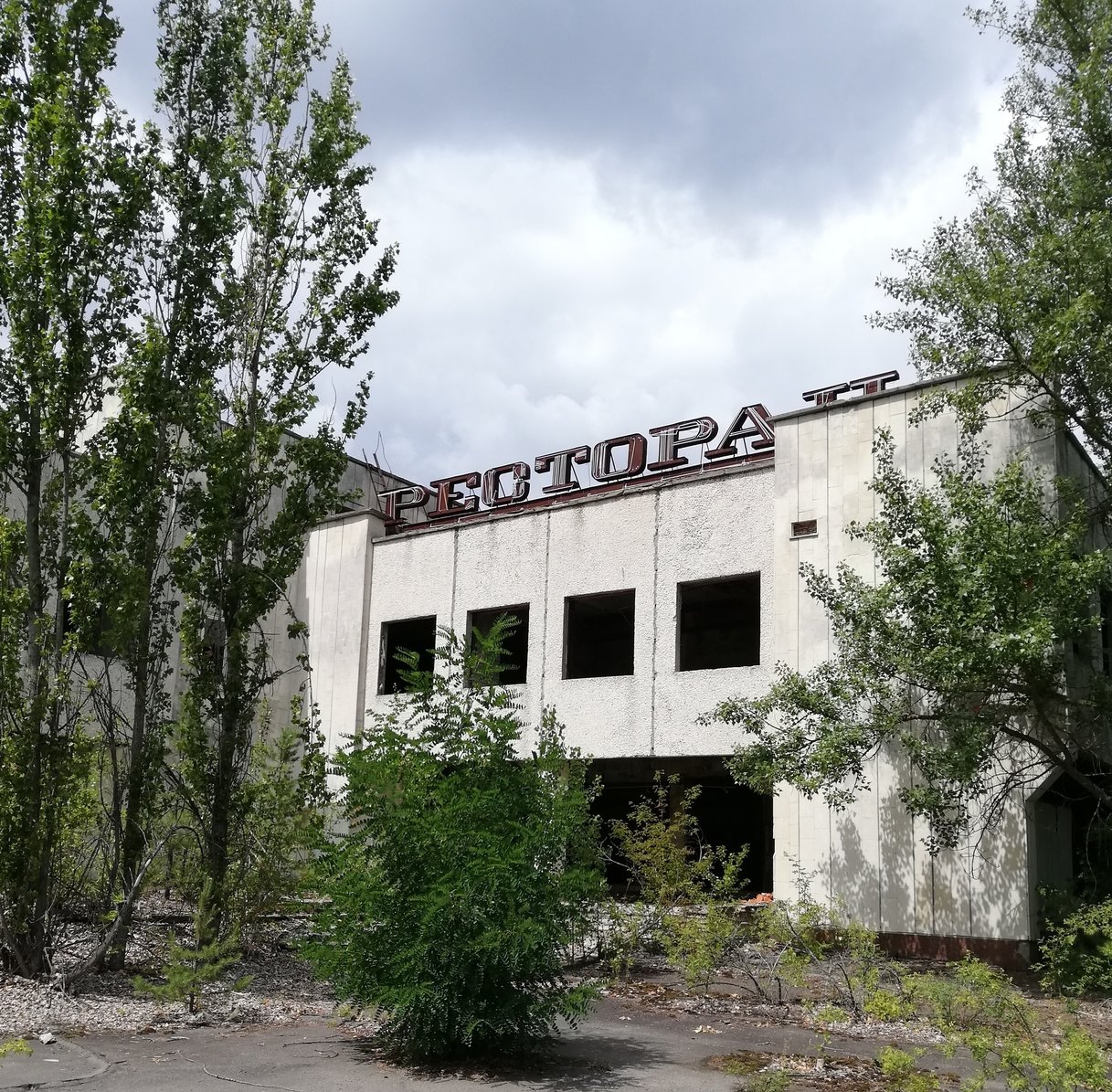 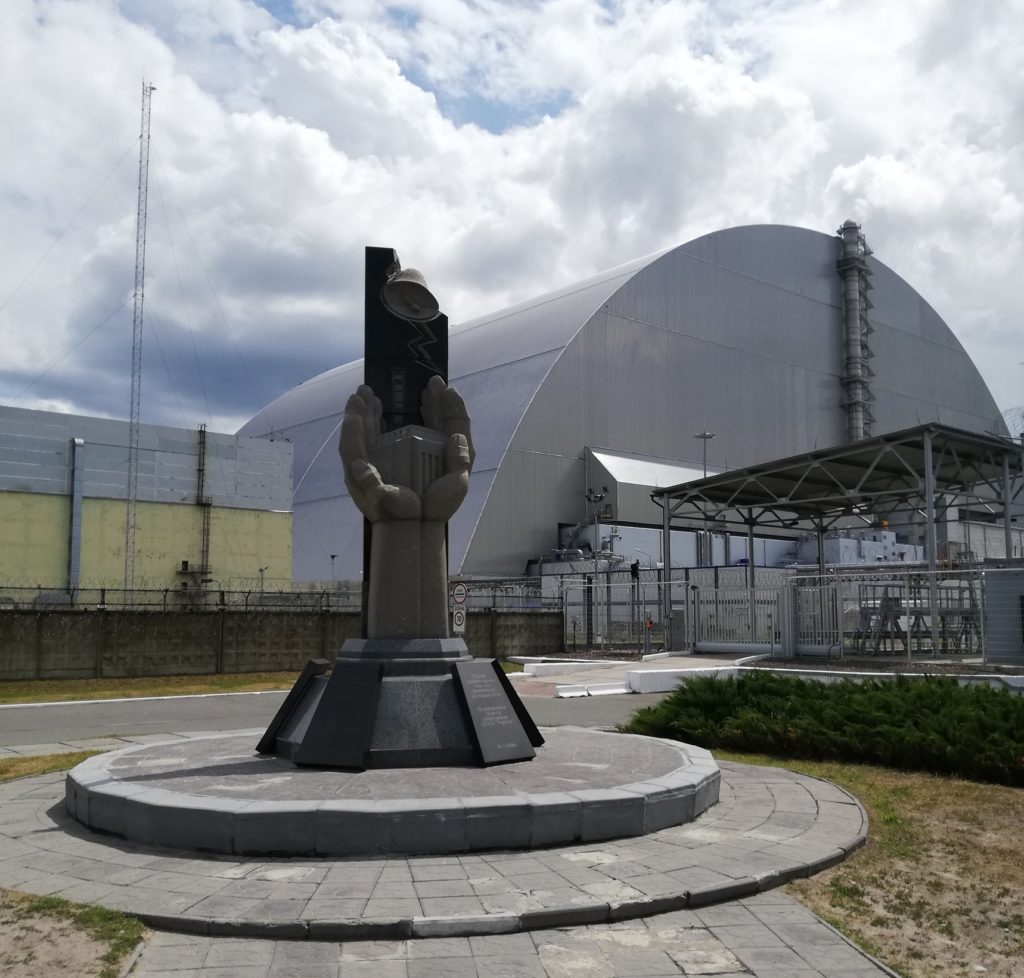 The main attraction of the trip. We stood right next to the damaged reactor without masks or protective garments. We stayed here for like 10 minutes, while our guide told us how the authorities are planning to seal off the radiation from the damaged reactor once and for all (they have no idea). While we stood there I saw lots of uniformed workers buzzing in and out. It’s still busy there.

We could stand next to the blasted reactor without protection thanks to the 2+ billion dollar sarcophagus that was recently built to cover the reactor. Standing there we were receiving about the same dose of radiation as in Kyiv.

Afterward, we had lunch in a Soviet-style eatery close to the nuclear power plant. We had to go through radiation detectors to get in and out. The place was packed with workers and tourists.

The town of Chernobyl

Our last, and most unremarkable stop, the town of Chernobyl, about 15km from the power plant. The town stood here long before the power plant was built.  It was first mentioned in 1193. There are still people living here, tour guides, researchers, and a handful of residents who stayed after the disaster.

Genia told us he lives here for 15 days, then has to come back home for 15 days. The arrangement is obligatory to protect workers from radiation. 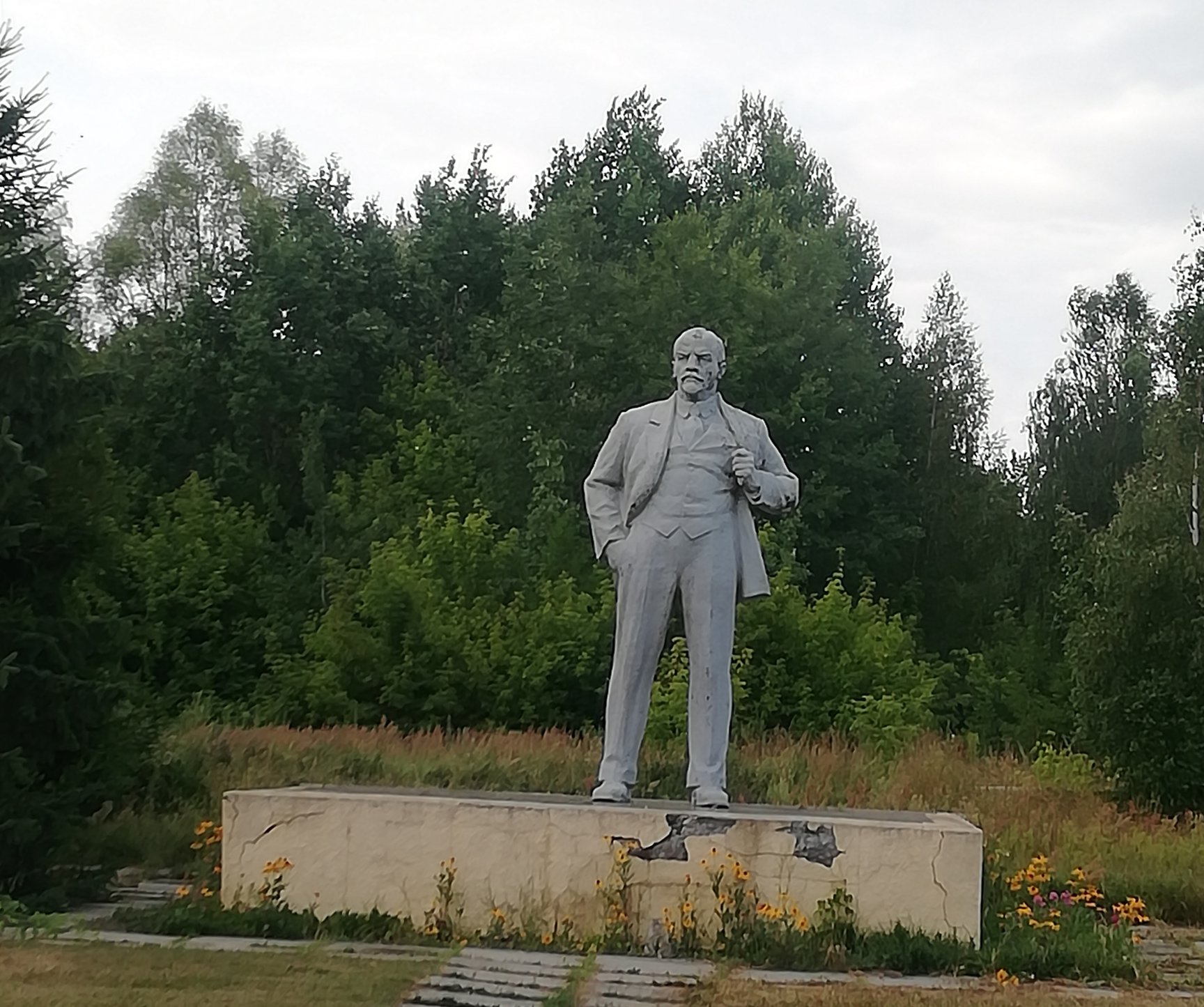 The town has the only public statue of Lenin in Ukraine. 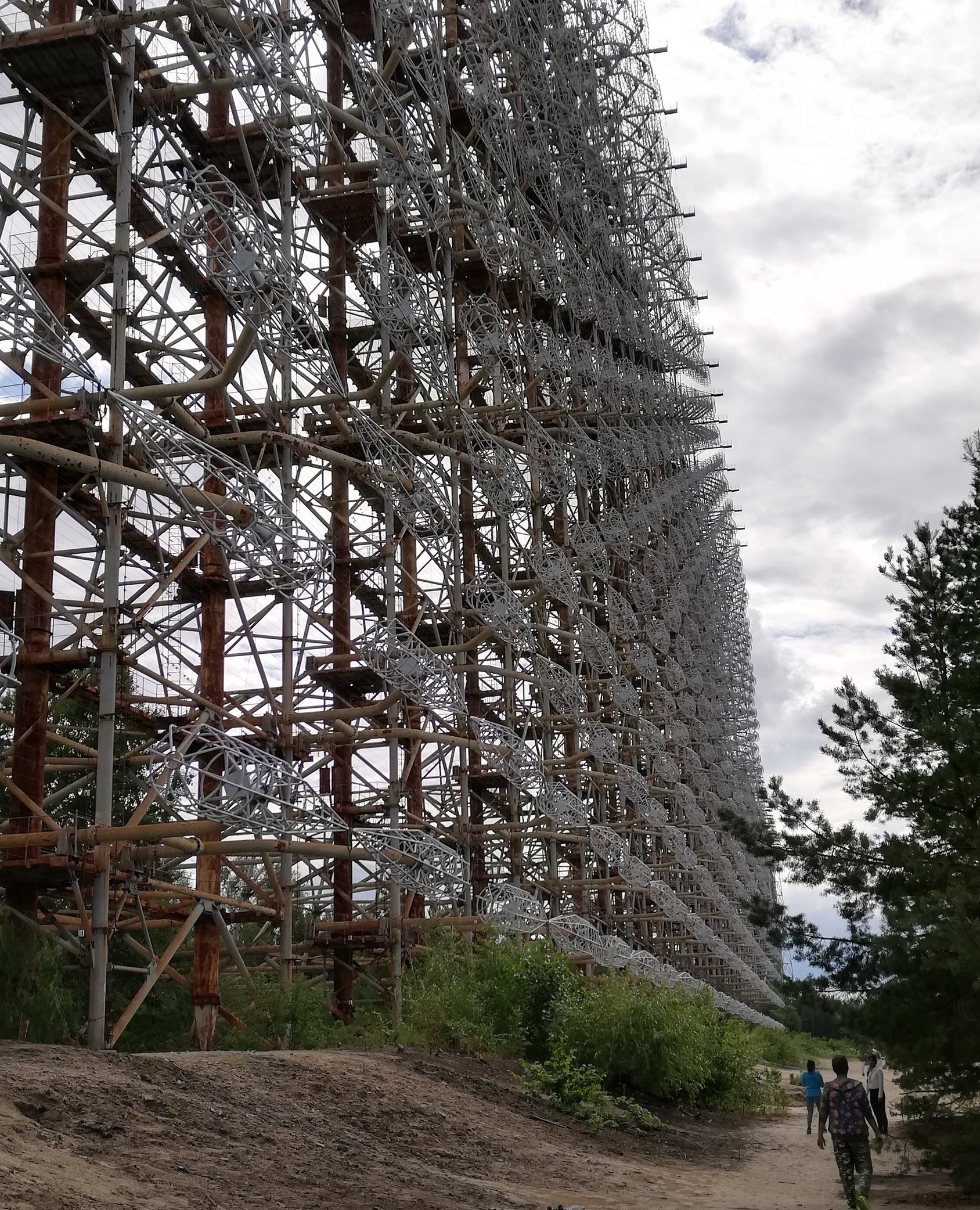 The final stop, the Duga missile defense radar. The biggest in the USSR. It stands in the middle of a forest with an impressive height of 150 meters and a width of 800 meters. We spent a few minutes just standing there awestruck by the size of this monstrosity. Try attempting something against Chernobyl with this kind protection USA!

On the way back we gave back our radiation necklaces and received the biggest surprise of the trip. We were exposed to less radiation in Chernobyl than during an average length flight. Maybe we were lucky or we were in the less adventurous spots. Who knows.

Should you visit Chernobyl?

If you are interested in Soviet history or this disaster in particular. Sure. If you saw the show and want to visit because of all the hype and all the Instagram likes you will get. Sure, why not. Just don’t be an idiot about it. The world doesn’t need to see your freaky Instagram selfies at the site of the world’s worst nuclear disaster.

I took the trip with Chernobyl Exclusive Tour. They are great. A group one day tour from Kyiv to Chernobyl is 99USD. You can also book a personal tour with them.