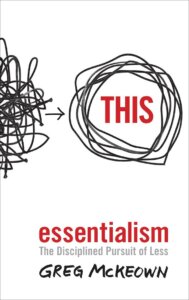 “I can do anything but not everything.”

Essentialism: The Disciplined Pursuit of Less shows you how to unburden your life by removing the unnecessary.  Read this book if you find yourself doing too many things at the same time and not making substantial progress in any direction. Been there, done(!) that.

Overcommitting is a symptom of not being sure what’s essential in life. Highly ambitious individuals who think they can do everything often fall into this trap. The painful paradox of wanting to accomplish too much is precisely what hinders them from accomplishing anything.

“When you are thrown in jail it’s terrible, but when you put yourself there it’s evil”. I am sure I heard this in one of After Skools excellent videos.

Overexertion is a prison that so many highly ambitious individuals lock themselves into. It’s a death foretold when a slacker doesn’t amount to much, it’s so obvious it’s almost comical. But when someone who is “grinding” his life out doesn’t amount to much it is tragic. All that effort; the endless hours of sacrifice and forfeited enjoyment, to find yourself in the same deplorable stature as the slacker.

Stripping out the unnecessary from your life is the antidote to this tragedy, according to author Greg McKeon.

The book does have the typical “self-improvement” hyperbole which I’ve grown to dislike, but it offers universal wisdom and practical advice.

Define what matters the most and focus on it exclusively.

Memorable passages from Essentialism: The Disciplined Pursuit of Less:

“Instead of making just a millimeter of progress in a million directions, he began to generate tremendous momentum towards accomplishing the things that were truly vital.”

“Only once you give yourself permission to stop trying to do it all, to stop saying yes to everyone, can you make the highest contribution towards the things that really matter.”

“The way of the essentialist means living by design, not by default.”

“Figure out the one thing that would make the higher contribution”

“The pursuit of success can be a catalyst for failure”

“As Peter Drucker said, “In a few hundred years, when the history of our time will be written from a long-term perspective, it is likely that the most important event historians will see is not technology, not the Internet, not e-commerce. It is an unprecedented change in the human condition. For the first time – literally – substantial and rapidly growing numbers of people have choices. For the first time, they will have to manage themselves. And society is totally unprepared for it.

“Almost everything is noise, and very few things are exceptionally valuable.”

“There are three deeply entrenched assumptions we must conquer to live the way of the Essentialist: “I have to”, “It’s all important” and “I can do both”.”

“Essentialism has three core truths: “I choose to”, “Only a few things really matter,” and “I can do anything but not everything.”

“If you could do only one thing with your life right now what would you do?”

“Most of what exists in the universe—our actions, and all other forces, resources, and ideas—has little value and yields little result; on the other hand, a few things work fantastically well and have a tremendous impact.—Richard Koch”

“We live in a world where almost everything is worthless and very few things are exceptionally valuable. As John Maxwell has written, “You cannot overestimate the unimportance of practically everything.”

“Designing life, essentially. The sole purpose of the class is to create space for students to design their lives. Each week it gives them a scheduled excuse to think. They are forced to turn off their laptops and smartphones and instead turn on the full power of their minds.”

“He resorted to a desperate measure. He gave his phone away and went to a motel with no Internet access. After 8 weeks of solitary confinement, he was able to get the project done.”

“Newton was asked how he had discovered the law of universal gravitation. “By thinking on it continually”.

“Inspired by Newton, I took a similar, if perhaps less extreme, approach to writing this book. I blocked off 8 hours a day to write: from 5 am to 1pm, five days a week.”

“When did you last take time simply to sit and think? I am talking about deliberately setting aside distraction-free time in a distraction-free space to do absolutely nothing other than think.”

“One practice I find useful is to read something from classic literature for the first 20 minutes of the day. It centers my day. It reminds me of themes and ideas that are essential enough to have withstood the test of time. Some works to consider: Zen, the Reason of Unreason; The Wisdom of Confucius; The Torah; the Holy Bible; Tao, to Know and Not Be Knowing; The Meaning of the Glorious Koran; As a Man Thinketh; The Essential Gandhi; Walden; The Book of Mormon; Meditations (Marcus Aurelius); the Upanishads.”

From Nora Ephron: “My high school journalism teacher, whose name is Charles O. Simms, is teaching us to write a lead–the first sentence or paragraph of a newspaper story. He writes the words “Who What Where When Why and How” on the blackboard. Then he dictates a set of facts to us that goes something like this: “Kenneth L. Peters, the principal of Beverly Hills High School, announced today that the faculty of the high school will travel to Sacramento on Thursday for a colloquium in new teaching methods. Speaking there will be anthropologist Margaret Mead and Robert Maynard Hutchins, the present of the University of Chicago.” We all sit at our typewriters and write a lead, most of us inverting the set of facts so that they read something like this, “Anthropologist Margaret Mead and University of Chicago President Robert Maynard Hutchins will address the faculty Thursday in Sacramento at a colloquium on new teaching methods, the principal of the high school Kenneth L. Peters announced today.” We turn in our leads. We’re very proud. Mr. Simms looks at what we’ve done and then tosses everything into the garbage. He says: “The lead to the story is ‘There will be no school Thursday.’”

“Apply the principle of “less but better” to your journal. Restrain yourself from writing more until daily journaling has become a habit.”

“Bill Clinton was quoted as saying that every major mistake he had made in his life had happened as a result of sleep deprivation.”

“The second most important factor differentiating the best violinists from the good violinists was sleep. The best ones slept longer.”

“Even a nap can increase creativity.”

“If we feel total and utter conviction to do something, then we say yes. Anything less gets a thumbs down.”

“Jim Collins says that if there’s one thing you are passionate about – and that you can be best at – you should do just that one thing.”

“We are looking at the one thing we can make our absolutely highest  point of contribution.”

“We tend to value things we already own more highly than they are worth, and thus find them more difficult to get rid of.”

“When we are unclear about our real purpose in life we make up our own social games. We value stuff like having a nicer car  or house, followers on social media, or how we look in pictures.”

“When individuals are involved in too  many activities they fail to achieve their essential mission.”

“The crime which bankrupts men and states is job-work—declining from your main design, to serve a turn here and there. Nothing is beneath you, if it is in the direction of your life, nothing is great or desirable if it is off from that. I think we are entitled here to draw a straight line and say that society can never prosper but must always be bankrupts, until every man does that which he was created to do.” Emerson.

“If we could be truly excellent at only one thing, what would it be?”

“Peter Drucker, in my view the father of modern management thinking, was also a master of the art of the graceful no. When Mihaly Csikszentmihalyi, the Hungarian professor most well known for his work on ‘flow,’ reached out to interview a series of creative individuals for a book he was writing on creativity, Drucker’s response was interesting enough to Mihaly that he quoted it verbatim: ‘I am greatly honored and flattered by your kind letter of February 14th—for I have admired you and your work for many years, and I have learned much from it. But, my dear Professor Csikszentmihalyi, I am afraid I have to disappoint you. I could not possibly answer your questions. I am told I am creative—I don’t know what that means…I just keep on plodding…I hope that you will not think me presumptuous or rude if I say that one of the secrets of productivity (in which I believe whereas I do not believe in creativity) is to have a VERY BIG waste paper basket to take care of ALL invitations such as yours—productivity in my experience consists of NOT doing anything that helps the work of other people but to spend all one’s time on the work that Good Lord has fitted one to do, and to do well.’”

“I am going to pass on this” is far better than not getting back to someone with a “I might be able to” when you know you can’t”.

“When I was writing this book I set an email bounceback with the subject line “In Monk Mode”. The email read “Dear friends, I am working on a new book which has put enormous burdens on my time.”

“Every day do something that will inch you closer to a better tomorrow.” Doug Firebauch.

“Everyday progress can make all the difference on how people feel and perform. “Of all the things that can boost emotions, motivation, and perceptions, the most important is making progress in meaningful work.”

“Heroic Imagination project. If you increase the odds of people operating with courage by teaching them the principles of heroism.”

“If you have a big presentation coming up, open a file right now and spend a few minutes starting to put down some ideas. Then close the file. No more than four minutes. Just start it.”

“Mihaly Csikszentmihalyi on creativity: Most creatives find out early what their best rhythms are for sleeping, eating, and working and abide by them. They wear comfortable clothes, interact only with people they find congenial, do only important things.”

“Focus on the hardest thing first.”

“Lao Tzu: “In work, do what you enjoy. In family life, be completely present.”

“Instead of being utilized at our highest level of contribution, we make only a millimeter of progress in a million directions. Would you rather see a long laundry list of “accomplishments” or just a few major accomplishments that have real meaning?”

After reading your thoughts about the book, Essentialism reminds me of Marie Kondo’s philosophy of tidying the house: get rid of everything that doesn’t spark joy in your life. It’s kind like focus on one important thing, everything else is noise.

Yep. Not very familiar with Kondo. Will check her out.