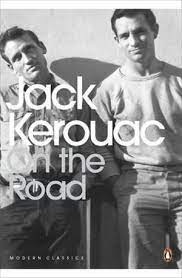 “Yes! You and I, Sal, wed dig the whole world with a car like this because, man, the road must eventually lead to the whole world. Ain’t nowhere else it can go – right?”

I had a hard time finishing On The Road. It’s not a particularly strenuous or long read, but it drifts aimlessly, on and on, just like Sal’s and Dean’s trips.

A portrait of two young friends traveling across America immersing in cheap thrills, sex, drugs, and jazz while the world is on the brink of the most profound social changes ever.

On the Road is a cautionary tale. A bold, red-lettered warning sign delivered in beautiful and profoundly sad prose. It reminds us of the dangers of searching for happiness in the wrong places. I think Kerouac wanted to warn us about the beat lifestyle instead of advertising it.

It’s the kind of book that hits differently depending on your age. At 21, you think the characters are “cool.” At 31, you think they are a bunch of losers.

Ultimate sadness is pretending you are having a great time while deep down, you know you aren’t. And nobody portrays this better than Kerouac.

On The Road might inspire you to jump on that road trip you’ve always wanted or forget about it.

The book is littered with beautiful prose, some jewels below.

Memorable passages from On The Road:

“There he got as drunk as he ever did in his Ninth Avenue night back home, and yelled joyously in my ear all the sordid dreams of his life.”

“We lay on our backs, looking at the ceiling and wondering what God had wrought when He made life so sad.”

“What do you want out of life? I asked, and I used to ask that all the time of girls.”

“LA is the loneliest and most brutal of American cities.”

“…they came to be starlets; they ended up in drive-ins.”

“Boys and girls in America have such a sad time together; sophistication demands that they submit to sex immediately without proper preliminary talk. Not courting talk — real straight talk about souls, for life is holy and every moment is precious.”

“I realized these were all the snapshots which our children would look at someday with wonder, thinking their parents had lived smooth, well-ordered lives and got up in the morning to walk proudly on the sidewalks of life, never dreaming the raggedy madness and riot of our actual lives, our actual night, the hell of it, the senseless emptiness.”

“Sal, we gotta go and never stop going ’till we get there.’

“We agreed to love each other madly.”

“I finally decided to hide from the world one more night with her, and the morning be damned.”

“Mañana, a lovely word and one that probably means heaven.”

“I want to marry a girl, I told them, so I can rest my soul with her till we both get old. This can’t go on all the time – all this franticness and jumping around. We’ve got to go somewhere, find something”

“The one thing that we yearn for in our living days, that makes use sight and groan and undergo sweet nausea of all kinds, is the remembrance of some lost bliss that was probably experienced in the womb and can only be reproduced (though we hate to admit it) in death.”

“Their food bill was the lowest in the country…”

“His chief hate was Washington bureaucracy; second to that, liberals; then cops.”

“Then I knew I loved her so much I wanted to kill her.”

“Bitterness, recrimination, advice, morality, sadness, – everything was behind him, and ahead of him was the ragged and ecstatic joy of pure being.”

“Our battered suitcases were piled on the sidewalk again; we had longer ways to go. But no matter, the road is life.”

“But the sight of his uneaten food made me sadder than anything in years.”

“…nothing frightens em more than what they want.”

“Oh a girl like that scares me, I said. Id give everything up and throw myself on her mercy and if she didn’t want me just as simply go and throw off the edge of the world.”

“Yes! You and I, Sal, wed dig the whole world with a car like this because, man, the road must eventually lead to the whole world. Ain’t nowhere else it can go – right?”

“The people who were in that all-night movie were the end. Beat Negroes who would come up from Alabama to work in car factories on a rumor; old white bums; young longhaired hipsters who had reached the end of the road and were drinking wine; whores, ordinary couples, and housewifes with nothing to do, nowhere to go, nobody to believe in.”

“…the only people for me are the mad ones, the ones who are mad to live, mad to talk, mad to be saved, desirous of everything at the same time, the ones who never yawn or say a commonplace thing, but burn, burn, burn like fabulous yellow roman candles exploding like spiders across the stars and in the middle you see the blue centerlight pop and everybody goes “Awww!”

“A pain stabbed my heart, as it did every time I saw a girl I loved who was going the opposite direction in this too-big world.”

Opening line of On The Road*

“I first met Dean not long after my wife and I split up. I had just gotten over a serious illness that I wont bother to talk about, except that it had something to do with the miserably weary split-up and my feeling that everything was dead. With the coming of Dean Moriarty began the part of my life you could call my life on the road.