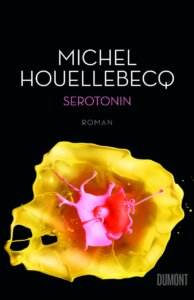 Despite the sadness, the themes that Houellebecq covers are crucial. Our atomization, “Paris: like all cities, Paris was made to generate loneliness,”. Our sexual liberation, which in theory should have opened us boundless joy, yet it brings us increased loneliness and deviation.

Hollebeq mocks modern society through the lens of a middle-aged, lonely, depressed, romantically and professionally unfulfilled, wealthy, alcoholic (but very smart) character. Who decides to go off the grid.

But escaping the city is a remedy in vain. What he finds in the desolation of the Normandy countryside is a nightmare beyond what he ever imagined.

Our observer of the grim design of our modern world is a composite of so many men who have almost scientific knowledge of what’s wrong yet lack the will to change it. The main character just anesthetizes the pain. It’s as if society itself knows exactly what’s wrong but it is too distracted – or apathetic — to change anything.

Towards the end, it becomes frustrating to follow the main character. He just soaks in his misery without doing much about it. Serotonin by Michel Houllebecq is an enjoyable read. But do not expect much of a story.

Read it if you are interested in a gross critique of modern society and its decline. Avoid if you are sensitive — there’s some graphic content.

“I don’t smoke a cigarette before taking my first sip, it’s an obligation that I impose upon myself, a daily success that has become my chief source of pride (here I must admit, having said this, that electric coffee makers work quickly). ”

“ I have allowed myself to be buffeted by circumstances on this point as on almost everything else, I have demonstrated my inability to take “control of my life,”

“I knew at first sight that in her life she had only had happy experiences, with animals, men, even with employers.”

“Overall, the menu of the establishment excited me, and even made me reconsider the negative judgement that I had initially formed about its name: the use of the name ‘Jules’ had in fact allowed them to develop a deeply innovative menu system, in which the creativity of the names of dishes was combined with meaningful contextualisation; for example, the chapter devoted to salads juxtaposed ‘Jules in the South’ (lettuce, tomatoes, egg, prawns, rice, olives, anchovies, peppers) with ‘Jules in Norway’ (lettuce, tomatoes, smoked salmon, prawns, poached egg, toast). For my part, I felt that I would soon (perhaps even this lunchtime) be succumbing to the delights of ‘Jules on the farm’ (lettuce, ham, Cantal cheese, fried potatoes, walnut halves, boiled egg), unless I fell prey to those of ‘Jules the shepherd’ (lettuce, tomatoes, warm goat’s cheese, honey, lardons).”

“When they had a difficult decision to make, the knights of the Middle Ages, and later the Puritans of New England, opened their Bibles at random, rested their fingers also at random on the page and gave an interpretation of the verse they were pointing to, then took the direction indicated to them by God.”

“Coincidences are winks by God’ – was that Vauvenargues or Chamfort? I had forgotten, or maybe it was La Rochefoucauld ”

“That’s probably also why the friendships of our youth, the ones we make during our time as students and which are our only true friendships, never survive into adulthood: we avoid seeing them so as not to be confronted by witnesses to our crushed hopes, the evidence of our defeat.”

“…And that’s how a civilisation dies; without worries, without danger or drama and with very little carnage; a civilisation just dies of weariness, of self-disgust – what could social democracy offer me? ”

“Paris: like all cities, Paris was made to generate loneliness,”

“I had felt a real affection for her father, and I sensed that he liked me; every now and again he dropped by to bring a bottle – alcohol is very important for the elderly, it’s almost all they’ve got left.”

“I have a bungalow with a children’s room as well, with a pair of bunk beds; and one with two children’s rooms, so four extra rooms; given Western demographics, I thought that would be enough. Unfortunately I have no Wi-Fi…’ he said wit”

“Her parents had received the news with resignation; they were aware that the world had changed, not necessarily for the better they thought deep down, but it had changed, and the new generation had to go through strange detours to achieve their reproductive function.”

“There are areas of the human psyche that remain little-known because they haven’t been much explored, because luckily few people have found themselves in a situation of needing to explore them, and those who have done so have, as a general rule, preserved too little of their reason to produce an acceptable description of them.”

“But time had moved on since then; there had been the invention of the city and its natural corollary – loneliness”

“A Lolita could have made Thomas Mann lose his marbles; Marcel Proust would have crushed on Rihanna.”

“ It probably happens more quickly for those who have never belonged to the world, who have never imagined living, or loving, or being loved; those who have always known that life was not within their reach. Those people, and there are many of them, have, as they say, nothing to regret; I am not in that situation.”