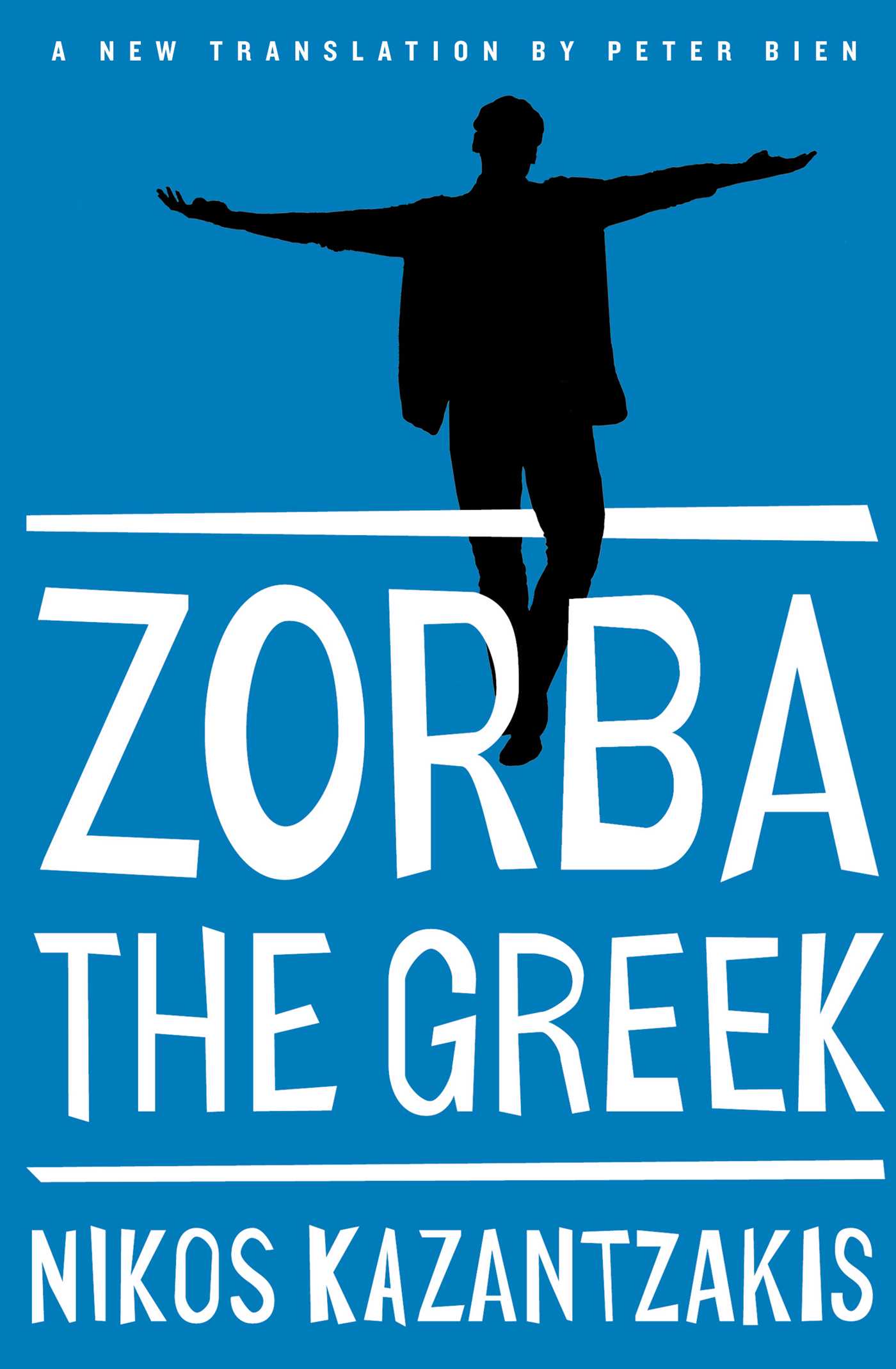 I’ve always considered reading a worthy activity. Being buried in a book while the rest of the world is busy with less cultivated pursuits like living…wait, living? Isn’t that the point?

And nobody lived more fully than Zorba The Greek.

“I was envious of the man. He had lived with his flesh and blood – fighting, killing, kissing – all that I had tried to learn through pen and ink alone.”

The characters become inseparable friends. They try to learn about the meaning of life from each other while pursuing an ambitious business venture in the coast of Crete. The characters’ experiences always intersect at one of the central questions of life.  Who is right? The ascetic who sacrifices today’s worldly pleasure for a promise of a better future or the Zorbas of the world who don’t spare a bit for eternity and throw themselves headlong into life.

Of course, you will not find the answer in a book.

Ink and paper will never teach you life’s most profound lessons. You may learn them on a surface level, but they will not be ingrained in your soul like what you live. You avoid touching a hot stove because you’ve felt the burn, and that’s a lesson you carry for the rest of your life. We know what gives us joy, boredom, and of course, what gives us pain. But we only learn these, if we dare to live.

Only through experience we discover who we are, and our God-given gifts. Zorba embodies this ethos fully. He knows not because he read, or conducted a study, or learned at school. He knows because instinct guides him.

Yet, instinct can betray us. Zorba also has his vices. He lacks morals, he is untrustworthy, and cannot control his impulses — the kind of person you want to drink with or have on your side in a fight — but not to lead an engineering project.

That’s why the friendship between the narrator and Zorba is so magnetic. They need to learn from each other. Ideally you would combine both. The wisest have a life well lived and a library full of (read) books.

I learned more from Zorba though. I am more on the bookish side (obviously, I write book reviews). Self-doubt and dwelling over small details has held me back from living. I definitely need to spend less time pondering, and more time acting.

But nothing will change my mind about this… after a good day of living there’s nothing better than a good book.

I dedicate this review to my Greek friend, AA, who is pure unfiltered action.

Memorable passages from Zorba The Greek

“How could I, who loved life so intensely, have let myself be entangled for so long in that balderdash of books and paper blackened with ink! In that day of separation, my friend had helped me to see clearly. I was relieved. As I now knew the name of my affliction, I could perhaps conquer it more easily. It was no longer elusive and incorporeal; it had assumed a name and a shape, and it would be easier for me to combat it.”

‘Bravo, my friend!’ he cried in admiration. “Those seamen know the secret. Most likely because day and night they’re at grips with death.’

“Happy is the man, I thought, who, before dying, has the good fortune to sail the Aegean Sea.”

That’s what you might call being a man: freedom!’

‘As far as I can see, your lordship’s never been hungry, never killed, never stolen, never committed adultery. What ever can you know of the world? You’ve got an innocent’s brain and your skin’s never even felt the sun” he muttered with obvious scorn.

We started off in the direction of the village. The hours amongst the rocks had passed as time passes between lovers, like lightning.

I can see quite clearly today, as regards myself, that I am not stifled by reason, God be praised!  I still feel ready to set out on Quixotic expeditions.

‘That man has not been to school, I thought, and his brains have not been perverted. He has had all manner of experiences; his mind is open and his heart has grown bigger, without his losing one ounce of his primitive boldness. All the problems which we find so complicated or insoluble he cuts through as if with a sword, like Alexander the Great cutting the Gordian knot.’

Whatever you do, you can’t go wrong. Even if you wanted to, you couldn’t. You’re like a lion, shall we say, or a wolf. That kind of beast never behaves as if it were a sheep or a donkey; it is never untrue to its nature. And you, you’re Zorba to the tips of your fingers.’

Sitting on my mattress, I thought of my life which was being completely wasted. Through the open door I could just discern Zorba by the light of the stars. He was crouching on a rock, like a night-bird. I envied him. It is he who has discovered the truth, I thought. His is the right path. In other, more primitive and creative ages, Zorba would have been the chief of a tribe. He would have gone before, opening up the path with a hatchet. Or else he would have been a renowned troubadour visiting castles, and everybody would have hung on his words – lords and ladies and servants … In our ungrateful age, Zorba wanders hungrily round the enclosures like a wolf, or else sinks into becoming some pen- pusher’s buffoon.

If I ever had to make laws, I shouldn’t make the same laws for men and for women. Ten, a hundred, a thousand commandments for man. Man is a man, after all; he can stand up to it. But not a single law for woman. Because – how many times do I have to tell you this, boss? – woman is a creature with no strength.

‘How the soul of man is transformed according to the climate, the silence, the solitude, or the company in which it lives!

‘I don’t want any trouble!’ I replied angrily. I was irritated because in my heart of hearts I also had desired that all-powerful body which had passed by me like a wild animal on heat, distilling musk.

‘You don’t want any trouble!’ Zorba exclaimed in stupefaction. ‘And pray, what do you want, then?’I did not answer. ‘Life is trouble,’ Zorba continued. ‘Death, no. To live – do you know what that means? To undo your belt and look for trouble!’

Tomorrow,’ he said, I’m going to need all my strength. I’ll have to fight against a thousand demons. Good night!’

I could not sleep. I felt I had to account for my acts that very night. I went over my whole life, which appeared vapid, incoherent and hesitating, dream-like. I contemplated it despairingly. Like a fleecy cloud attacked by the winds from the heights, my life constantly changed shape. It came to pieces, reformed, was metamorphosed – it was, by turns, a swan, a dog, a demon, a scorpion, a monkey – and the cloud was for ever being frayed and torn. It was driven by the winds of heaven and shot with the rainbow.

She left the gate open and I saw her disappear behind the orange trees, swaying her hips as she went.To enter that gate and bolt it, to run after her, take her by the waist and, without a word, drag her to her large widow’s bed, that was what you would call being a man! That was what my grandfather would have done, and what I hope my grandson will do! But I stood there like a post, weighing things up and reflecting …’In another life’ I murmured, smiling bitterly, ‘in some other life I’ll behave better than this!’

I am swallowed up by activity and I am glad of it. Action, dear inactive master, action; there is no other salvation.

‘When you’re broke, you have to have a good time’ said Zorba.

“The day’s for working,’ he said. ‘Daytime is a man. The night-time’s for enjoying yourself. Night is a woman. You mustn’t mix them up!’

His expression must have made silent progress in me. I sought a pretext for abandoning my papers and flinging myself into a life of action. I resented bearing this miserable creature upon my escutcheon

‘What are you thinking about?’ he asked me familiarly, shaking his great head. ‘You keep a pair of scales, too, do you? You weigh everything to the nearest gramme, don’t you? Come on, friend, make up your mind. Take the plunge!’

Zorba felt Bouboulina’s plump little hand trembling on his knee. That knee was the last inch of solid ground to which this poor creature of a thousand and one shipwrecks could cling.

For the simple reason that I live all those mysteries, as you call them, and I haven’t the time to write. Sometimes it’s war, sometimes women, sometimes wine, sometimes the santuri: where would I find time to drive a miserable pen? That’s how the business falls into the hands of the pen-pushers! All those who actually live the mysteries of life haven’t the time to write, and all those who have the time don’t live them! D’you see?’

I was envious of the man. He had lived with his flesh and blood – fighting, killing, kissing – all that I had tried to learn through pen and ink alone. All the problems I was trying to solve point by point in my solitude and glued to my chair, this man had solved up in the pure air of the mountains with his sword.

Ah! if only I was as young as you! I’d throw myself headlong into everything! Headlong into work, wine, love – everything, and I’d fear neither God nor devil! That’s youth for you!

“If they meet tonight there will be murder.”

“As if Christ were a medicine to be taken only when gravely ill, and of no use so long as you can have a good time, eat, drink and make love.”

“I’m not ashamed to cry, if it’s in front of men. Between men there’s some unity, isn’t there? It’s no disgrace. But in front of women a man always has to prove that he’s courageous. Because if we started crying our eyes out, too, what’d happen to these poor creatures? It would be the end!’

‘Happiness is doing your duty, and the harder the duty the greater the happiness.’

“When everything goes wrong, what a joy to test your soul and see if it has endurance and courage!”